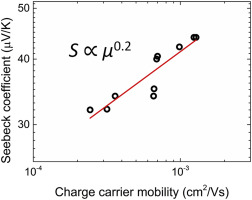 Room temperature flexible heat harvesters based on conducting polymers are ideally suited to cover the energy demands of the modern nomadic society. The optimization of their thermoelectric efficiency is usually sought by tuning the oxidation levels of the conducting polymers, even if such methodology is detrimental to the Seebeck coefficient (S) as both the Seebeck coefficient and the electrical conductivity (σ) are antagonistically related to the carrier concentration. Here we report a concurrent increase of S and σ and we experimentally derive the dependence of Seebeck coefficient on charge carrier mobility for the first time in organic electronics. Through specific control of the conducting polymer synthesis, we enabled the formation of a denser percolation network that facilitated the charge transport and the thermodiffusion of the charge carriers inside the conducting polymer layer, while the material shifted from a Fermi glass towards a semi-metal, as its crystallinity increased. This work sheds light upon the origin of the thermoelectric properties of conducting polymers, but also underlines the importance of enhanced charge carrier mobility for the design of efficient thermoelectric polymers.