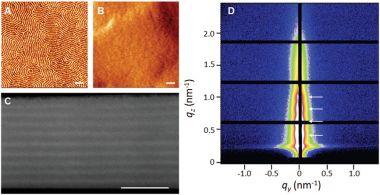 Spin coating is one of the most versatile methods to generate nanostructured block copolymer (BCP) thin films which are highly desired for many applications such as nanolithography or organic electronics. The self‐assembly pathways through phase separation, both in solvent and in bulk, strongly influence the final BCP structure obtained after spin coating. As a demonstration, the formation of highly ordered in‐plane lamellae is elucidated herein by using in situ grazing incidence small‐angle X‐ray scattering. A key step in this complex fast organization process is the formation of intermediate micellar phases triggered by solvent affinity toward one of the block. Indeed, directional coalescence of a short‐lived intermediate hexagonal structure of cylindrical micelles enables the development of a final highly ordered lamellar structure, predominantly oriented parallel to the substrate surface. These results suggest that the existence of such transient micellar phases is a crucial process in order to produce highly ordered structures with a specific orientation directly after the BCP thin film deposition; and should be the focus of further optimization for the directed self‐assembly and, more generally, in the bottom‐up nanostructure fabrication.