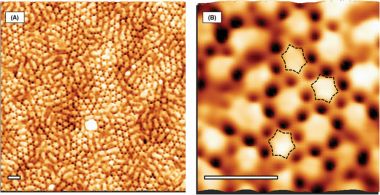 3‐Miktoarm star terpolymer architecture (3µ‐ABC), consisting of three dissimilar polymer chains, A, B, and C connected at a junction point, provides a unique opportunity in the design of complex nanoscale patterns such as Archimedean tilings that are not accessible from linear ABC terpolymers. In this work, the synthesis and the self‐assembly of 3‐miktoarm star terpolymers, namely, polystyrene‐arm‐poly(2‐vinylpyridine)‐arm‐polyisoprene (3µ‐SPI) into Archimedean tiling patterns is described. Several 3µ‐SPI terpolymers are produced via a mid‐functional PS‐b‐P2VP, synthesized by sequential anionic polymerization, using a 1,1‐diphenylethylene bearing a tert‐butyldimethylsilyl–protected hydroxyl functionality as a core molecule. PI arms with different sizes are then linked to the deprotected hydroxyl function of the core molecule via a Steglich esterification. Solvent‐annealed 3µ‐SPI thin films exhibit nanoscale prisms arranged into a (4.6.12) Archimedean tiling pattern. Depending on the size of the low etch‐resistant PI arm and the solvent selected to promote the self‐assembly of 3µ‐SPI thin films, the voided columns occupy the square or decagonal sites of the (4.6.12) pattern. The use of this (4.6.12) tiling produced for the first time from self‐assembled 3µ‐ABC thin films can be a promising route to build 2D photonic crystals having complete photonic band gaps, where the light propagation is completely prohibited.