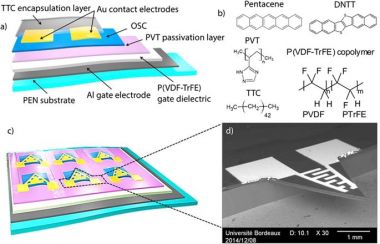 The growth of micro electro-mechanical system (MEMS) based sensors on the electronic market is forecast to be invigorated soon by the development of a new branch of MEMS-based sensors made of organic materials. Organic MEMS have the potential to revolutionize sensor products due to their light weight, low-cost and mechanical flexibility. However, their sensitivity and stability in comparison to inorganic MEMS-based sensors have been the major concerns. In the present work, an organic MEMS sensor with a cutting-edge electro-mechanical transducer based on an active organic field effect transistor (OFET) has been demonstrated. Using poly(vinylidenefluoride/trifluoroethylene) (P(VDF-TrFE)) piezoelectric polymer as active gate dielectric in the transistor mounted on a polymeric micro-cantilever, unique electro-mechanical properties were observed. Such an advanced scheme enables highly efficient integrated electro-mechanical transduction for physical and chemical sensing applications. Record relative sensitivity over 600 in the low strain regime (<0.3%) was demonstrated, which represents a key-step for the development of highly sensitive all organic MEMS-based sensors.